There are 18 different cargo items in Transport Fever:

There are 14 different industries in Transport Fever.

The overview tab of the industry window shows which cargo items are consumed and produced.

In the second example on the right, one crude is used to produce one oil or one fuel.

Production shows the amount of produced cargo in the last 365 days. 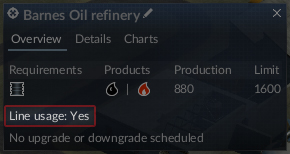 Line usage indicates if an industry is currently using a line set up by the player to ship items to a target.

An industry might choose not to use a line if: 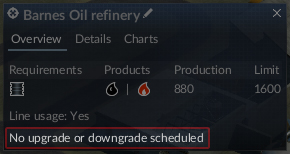 When production is at maximum (production reaches limit) for several months in a row, an industry gets upgraded to a higher level up to four times and doubles it´s limit as well as increases it´s storage capacity.

Conversely, industries get downgraded if the production remains at low levels for several months in a row. 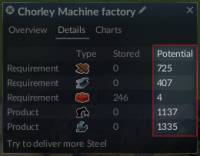 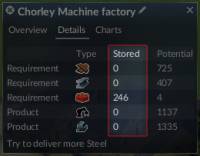 On the details tab you can find out more about the current stock and the potential.

The potential shows how much cargo could be ordered (for requirements) or shipped (for products) per year. The value is calculated based on the sum of production and free storage space of all suppliers respectively consumers. 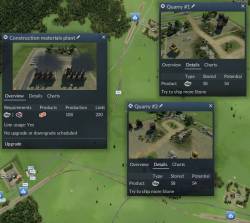 In the example below, two quarries feed the construction materials plant. The plant is currently producing 108 units per year and its input storage for stone is full. The quarries have a potential of 54 (half of 108) and will try to ship 54 units of stone per year, each to keep up with the construction materials plant's demand. If the production at the plant changes, the potential of the quarries will change too (with a delay). An input storage at the plant which is not completely full will also result in a higher potential for the quarries. If the potential of the quarry raises above its yearly production, it will use stone stored in the output storage to keep up with the demand until it gets upgraded.

Please note, that this example is just for illustration. There would be no need to feed the plant with two quarries, as one quarry can keep up with a construction materials plants production.